I caught the Canon Logic buzz last year when the title track from their self-released album Wyld made my personal Best of 2014 list. With a history of tremendous video releases already well documented, we’re pumped to be premiering a brand new one for their fourth single, Runaway. The track builds upon their tradition of impressive artistic collaborations, calling in rock violinist Marques Toliver from his busy schedule touring with Sir Paul McCartney.  Energetic, skillful and majestic, the Runaway video layers musical influences from The Temper Trap and Local Natives over a playfully twisted visual narrative of the modern day Little Red Riding Hood. We’re honored to have the guys headlining our Spring Showcase this Thursday March 26th at Pianos.  Find full details on the showcase after the bump and we hope to see you there! 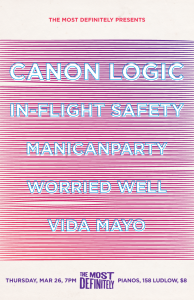