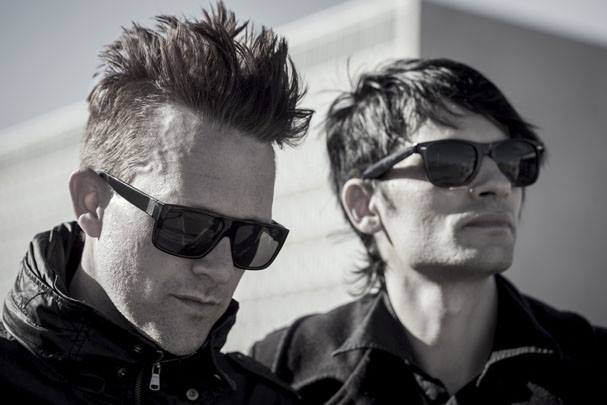 An Interview with Night Drive + VIDEO

TMD caught up with our favorite Austin duo, Night Drive recently and we got to talking about Hall & Oates, In N Out, Sean Connery and 90’s fashion. Here’s what we learned.

First, check out their most recent video release: Sea of Light

TMD: Rodney and Brandon- describe each other in one word

B: for Rodney – Lobstromonous
R: for Brandon – Humanoid

Word has it you’re in LA as we are doing this interview, did you go to In N Out yet? If so what’d you get? If not, why???

B: Yes, on this tour I had my first In-N-Out experience. The burger was amazing but the fries were a bit lackluster. After complaining about the fries a friend told me I needed to order them prepared a special way. “Rolled through the mud” or something. I’m skeptical.
R: I’m vegetarian so I did not partake. Not even the fries.

How’s it been touring with Tesla Boy? Have you met any characters along the way?

We couldn’t really ask for a more ideal tour. All of the members of Tesla Boy are great people and their live show is incredible. As for tour characters? There was a man on the Venice Beach strip who was earning money by jumping into a big pile of broken glass for spectators.

Where’d the name Night Drive come from? What’s your favorite place to take a night drive?

The name originally came from a disastrous mishap that occurred when Rodney and I first met. But today it represents the feelings that you experience only at night. Our favorite place to take a Night Drive would have to be in downtown Tokyo.

What would your fans be surprised by if they actually knew you?

B: They’d be surprised that I was born speaking French.
R: I stalked Tom Waits one time when he was in Austin.

Which one of you is a better dancer?

The jury’s still out on that one. But we’re entering a salsa competition in the next few weeks to get this matter settled, so we’ll keep you updated.

Who would you love to collab with in the future?

B: Too many to name them all: The big guns like James Murphy and Cut Copy of course, Ariel Pink, The Drums, Lifelike, Tesla Boy (which may or may not actually be on the horizon in the future)
R: David Lynch or Wes Anderson

Rodney & Brandon- Someone hits shuffle on your iPod. What are 3 songs are you most embarrassed to have on there?

B: I have quite a lot of Enya on there, definitely more than 3 songs. I’m guessing that doesn’t win many cool points.
R: I can sincerely say I wouldn’t be embarrassed by anything on my ipod but I do have some Wham and some people might find that uncool but Everything She Wants is an awesome song. I don’t care what anybody says.

B: For me it would probably be a soundtrack song, something like the Bryan Ferry track at the end of Legend (Is Your Love Strong Enough) which I really enjoy.
R: If You Leave Me Now – Chicago. Sometimes I just find myself humming it.

B: Favorite 80s song – Hm, maybe Laura Branigan’s Self Control or The Cure’s Lovecats. The most influential 80s band for me personally would be The Chameleons, they are probably my favorite 80s band overall.
R: I don’t like having to choose because I know I’ll think of something else later, but Get On The Floor by Michael Jackson or Bad Boys Get Spanked by The Pretenders are good ones. The Smiths and Joy Division are pretty safe bets for most influential. They both set the bar pretty high.

What’s a non-music venue you’d most like to play a concert in?

B: A huge igloo in the Antarctic would be nice.
R: The Dom Cathedral or Guggenheim Museum would be really cool.

You recently remixed a song for us which is awesome. Did you find it challenging to work on a non-electro song for a remix? How was the process different if at all?

It was a challenge because rock music generally doesn’t have a set BPM, so it takes some cutting and pasting to make all the vocals match well. But it’s always a fun challenge to try and put our mark on something that is a bit different stylistically.

B: Zardoz. I saw that movie when I was a kid and I still remember it vividly, Sean Connery in a loin cloth and giant floating heads.
R: Time Bandits. I love that movie.

If you could create a ridiculous rider for a concert tour, what would be on it?

A horse-drawn buggy must pick up the band 1 mile from the venue and take them to the front door. Brandon must have an assistant by his side at all times, carrying a porcelain jar of black licorice. Rodney requires all clocks in the venue, as well as watches, to be turned back exactly 1 hour. The hotel room decor must be thematically related to an Alfred Hitchcock film. Please provide a projector in the hotel room with the relevant film.

Rodney & Brandon: Most embarrassing fashion trend you took part in. What was it? Would you do it again?

B: I wore jams throughout my childhood. Anyone who was a kid in the 90s probably remembers them, they were basically huge neon swim trunks that you wore on dry land. I’d do it again if I lived in a more aquatic environment.
R: 90s attire was just too loose. Clothes were way too baggy. Everyone just kind of looked sloppy. I don’t think I’ll ever go back to clothes that aren’t fitted again…but never say never.

Rodney & Brandon: Best album of all time is?

B: I can’t answer that, though I wouldn’t argue if someone gave that title to Michael Jackson’s Thriller.
R: That’s an impossible question but I’ll say David Bowie’s Hunky Dory.

Best & worst part of being on the road?

Best part: The performance itself, meeting strangers who know and love your music. Worst part: We have a giant purple chest which contains most of the electronics for our show, it weighs a thousand pounds and moving that thing around is definitely the worst part. Coming up with ways to avoid moving that chest is our new favorite game on tour.

What’s next for Night Drive?

More releases are on the near horizon, along with a few new remixes. We’ll be playing CMJ in the near future as well, we’re definitely looking forward to spending some time in NYC and then we’re back on the west coast in November.