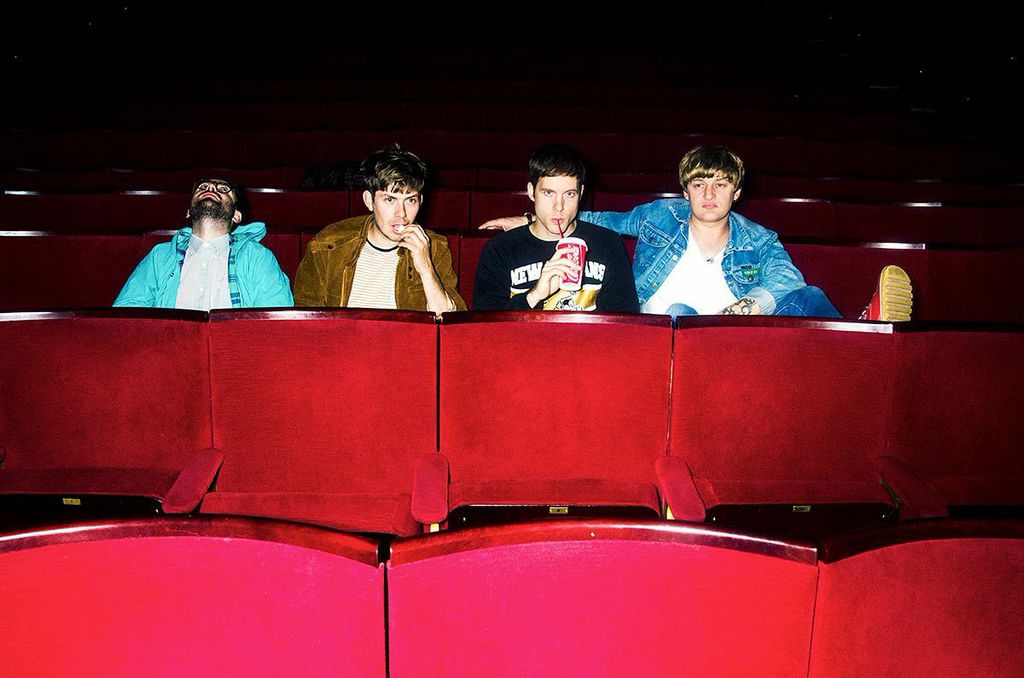 [INTERVIEW] Life In Film – Get Closer

2015 has already kicked off with an unbelievable amount of exciting releases and Life in Film’s new track certainly adds another to the list.

Whether you’ve heard of Life in Film throughout their five years of existence, or this is your first taste of their talent, this catchy record is sure to have you hooked. As the London-based band gears up to release their debut album, Here It Comes, we’ve fortunately been left with the album’s first single, “Get Closer.”

“Get Closer” is an excellent indie-pop jam that’s both bright and cheerful. It might actually be impossible to be in a bad mood when listening. With upbeat melodies that are fused with catchy hooks and pensive lyrics, this track is truly infectious.

This is the band’s first US release (under +1 Records) and we’re eager to get our hands on their album this year. We had the pleasure of chatting with singer Samuel Fry, who talks about the band’s creation, their weekend hangouts, and the creative process behind it all.

Chelsea: With a long history of friendship, how did Life in Film come together?

Samuel Fry: We all met at different points whilst studying and spent a lot of time hanging out, playing each other different tunes that we liked, and chatting about music…so I guess it was inevitable that we were gonna end up starting a band. When we started playing each other ideas for songs that we’d written, it all fell together quite naturally.

Rumor has it that when you first started out, you imagined it to be like The Beatles in Help! Can you tell us a little bit more about that?

Well we thought it was cool, them all living next to each other, so we wanted to do the same. But the closest we could get to emulating it was all moving in together on the fourth floor of some flats in Hackney. The flat was a bit grim and was invaded by mice and pigeons, but we had a balcony with an incredible view of the London skyline. So we sat out there in the summer and played acoustic guitars all night. We found a basement practice room around the corner, so we started trying out some of the songs on electrics. We practiced there for about a year before we realized that the snooker club upstairs was a really sweet place to hang out…

It’s a bit like when Pinocchio ends up playing pool and smoking cigars at that crooked old amusement park for naughty children. We’ve yet to sprout ears and a tail but that doesn’t stop us from making an ass out of ourselves.

As I mentioned above, it is absolutely impossible to be in a bad mood when listening to “Get Closer.” Where did the inspiration for this track come from?

Well, Ed had the riff that he’d been playing on a little Casio keyboard and the basic melody. So on a sunny day in Brixton, we all sat round in a flat that Dom and Mick were living in at the time. We chipped in little ideas and we built the track up. It was a time of transition for me, so the lyrics just kind of poured out about where I had been and where I might be going next.

Between the four of you, what’s the creative process like?

It’s often much like what’s described in the previous answer. Although, sometimes someone brings a tune like ‘Anna, please don’t go’ and we all just decide that it’s perfect the way it is and agree not to stick our noses in.

Outside of rehearsals and studio time, where would one find you on the weekends?

At the cinema, at a Turkish restaurant (byob), at a gig, at a gallery, in the park, in the pub, down the lanes. Something like that.

Who are your biggest musical influences?

It’s hard to say exactly. When we all lived together, there were several phases in the flat in which we introduced each other to stuff we liked. I distinctly remember a Style Council phase where we started dressing only in pastel colours. We listened to a lot of Motown and at one point, flirted with quite a bit of creole. We listened to The Beatles (obviously), although I think all four of us have a different favourite album.

Are there any artists around now that you relate to?

What exciting things can we expect from Life in Film in the coming months?

The release of our debut album followed by lots of touring…. It doesn’t get much more exciting than that as far as we’re concerned!!!

Get Closerindie popLife in Film