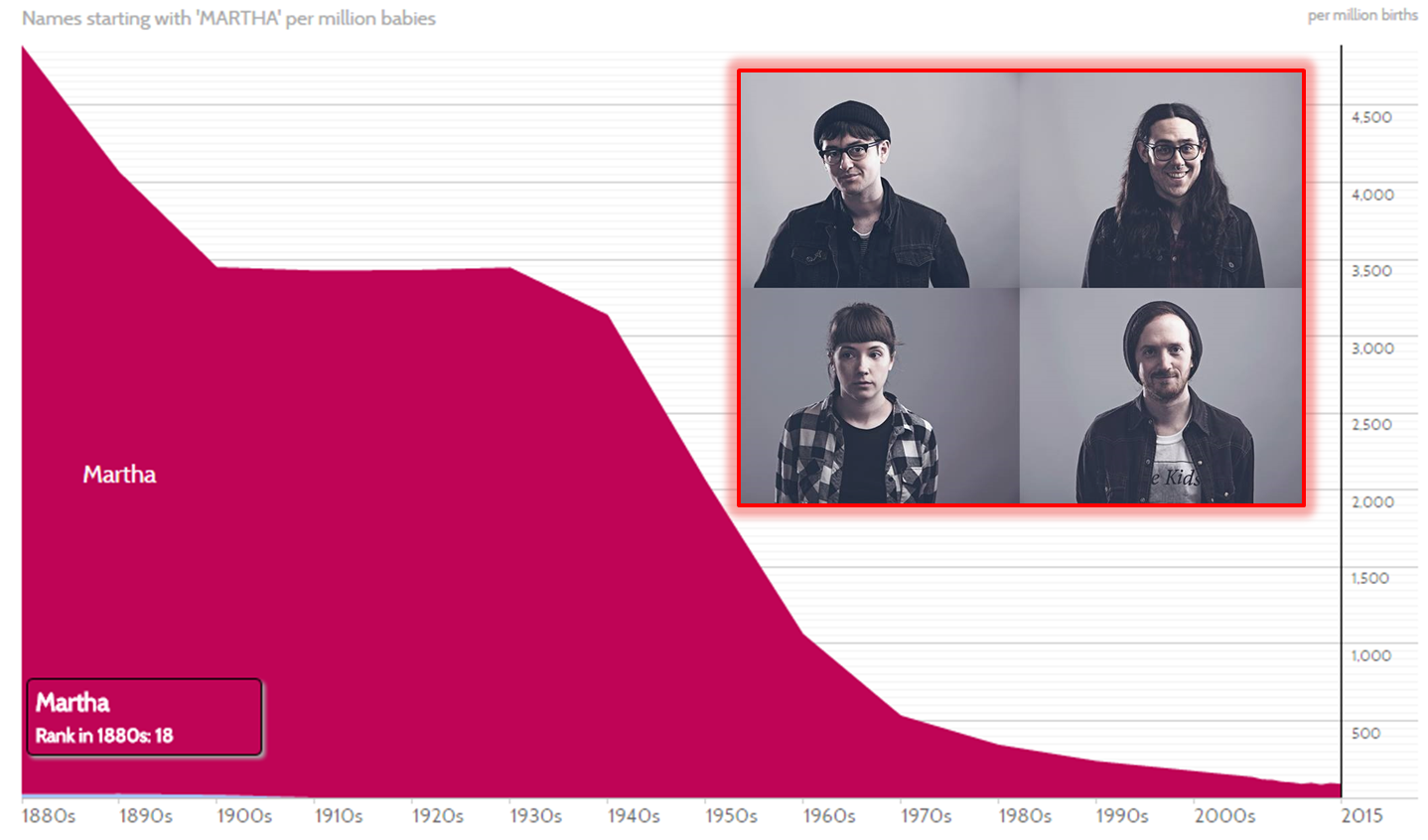 Is Martha becoming a thing?

According to the folks who track baby names and their respective popularity, the name Martha peaked in the 1880’s (#14) and has steadily declined to basically no one naming their kid Martha in 2016 (#1076). Given the cyclical nature of many baby names, as well as the fact that the sudden popularity of a celebrity will cause a quick firestorm of naming your child after said person (see: Miley [Cyrus], Adele, Arya [Game of Thrones]), some are predicting that Martha, along with other names popular in the early 1900’s (Audrey, Nora, Florence), are prime for a comeback. Furthermore, since we are a celebrity-obsessed culture, they are calling this the Downton Abbey Effect. Thing is, if you think that only nowadays we are celebrity-obsessed, you’d be mistaken. You gotta remember that back in the day, and then only until very recently, the most popular names were Biblical (or Mohammed). But what were saints other than the celebrities of their day and age? Only with TV and internet did we learn that Shaquille O’neal was awesome, and in turn, everyone name their kid Shaq in 1993, and only 1993.

There’s also a lot of pressure to name your kid something interesting and hip, without everyone in school having their same name (I’m pretty sure I only went to college with Jackie/Lindsey/Sarah. If I forgot someone’s name, I was pretty safe just saying those three names quickly at once, kinda like how my mom combines everyone in the family’s name together so she can address us as individuals and together as a group, simultaneously. Please meet: AnFeDeRichLeo – yes, Leo is the dog… not sure what that says about the rest of us). Officials in New Zealand have had to step in to change some kids’ names, since their parents are jerks and doomed them to a life of ridicule. Examples of names that needed changing were: Talula Does The Hula From Hawaii (wow), Fish and Chips, Sex Fruit (so mean), and in the honor of naming your kid after the place they were conceived, like Brooklyn or London, this baby was named Number 16 Bus Shelter…

Anywho, even though Martha isn’t a terribly popular name at the moment, this very cool foursome from England decided to name themselves Martha anyways. Who knows, maybe their success will help inspire some people to name their kids Martha, or maybe some couple will be listening to Martha’s killer new record (and this week’s Album Of The Week) Blisters in the Pit of My Heart during conception… Who knows? All we do know is Martha is a WAY better choice than Number 16 Bus Shelter… smh