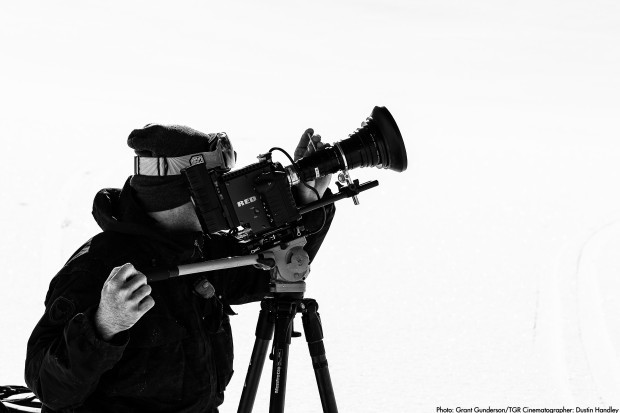 Kicking Off (mid)Season with TGR

It’s the storm of the century on the East Coast! How fitting then that we have a nice little feature for you today. You know what we love here at TMD? Music. But did you know that we also love to rip? We’re talking the slopes here. We’re talking steep drops and big lines, powder for days. We’re talking – well you get it. You know what helps bring out the ripper in all of us? Dope music. So what a wonderful thing – our Best Coast contributor, Emily sat down with Teton Gravity Research’s Dustin Handley – to talk heli-drops and bass lines. Be sure to check out our favorite tracks listed after the jump. I present you our first ever:

Teton Gravity Research (TGR) is a Jackson Hole based production company that brings us some of the most epic ski movies ever created including The Dream Factory, Light the Wick and One for the Road. Every year, TGR shows their newest movies at the Palace of Fine Arts in San Francisco in the fall. As with most, TGR movies are made even more epic through their soundtracks.

Dustin Handley, cinematographer and musical producer of TGR, picks songs that consistently inspire one to do something badass. Although he will refuse to admit any genius, Handley has brought together tracks that have kept many skiers going through long winters of hucking meat and kicking it by the fire.

Throughout our four hours together, it became clear that Handley doesn’t love to discuss himself. I found myself being enthusiastically interviewed and encouraged to pursue dreams I never knew I had. As inspiring as the films he creates, Handley is warm, humble and simply great company.

Handley credits his success, which he claims is driven mostly by inspiration, to his family and friends.

Excerpts from the Interview

What inspires you?
“It’s all just too exciting. If reincarnation is a fact, I’m going to be a blade of grass in a shit field because this has been too good. There’s just so much good in the world. Music creates good and inspires. Without music, fuck. Nike was right on point back in the 80s/90s. Just do it. Bust out.”

Music has always been a huge part of your life. When you emailed TGR in 2002 with hopes of joining the team, did you know you wanted to contribute to that part of the films?
“I’m a filmer first. My current aspiration is director of cinematography and music is more on the side for me. I certainly don’t see it is a negative but I don’t create this art. These artists do and it’s theirs. It’s not rocket science for me. If they evoke a certain feeling that matches and feels right, then perfect. Music really ties it together. I’m not a musical artist and I don’t think I deserve any type of credit for anything.”

Where did your training for cinematography come from? What’s the hardest part about it?
“Experience. The hardest part is realizing you’re not in control of whatever environment you’re dealing with and trying to see the beauty in it and capture it in the best sense.”

What is the hardest part of the music side of your job?
“The hardest part is licensing and fees. Music supervision is gnarly. The music world has been upside down for the past 10 years. It’s a struggle and everyone that’s involved knows it. You just have to hold in the back of your head that the artist is the one that deserves the credit.”

Can you briefly describe the process of selecting music for the TGR movies?
“We listen to music for a few months, pick 200 songs and then go from there. We work out which songs work best and when. Then our editor works it into the scene.”

If you take away the music from a movie, you take the emotion away. So there is an art to what you’re doing. How do you find the music for your films?
“I have to pee.”

“Whenever we go out on a road trip, there are a few things that new folks need to know. I snore, I have to pee a lot, and my feet smell. Other than that, I’m a pretty good guy.

I work closely with a lot of labels. It’s hard to get a grip on because there are so many. If I find a label that really speaks to me, then I’m more likely to listen. We receive mostly digital which we prefer because there’s no nasty packaging involved. However, it’s a sad situation because it just doesn’t sound the same. When you listen to as much music as I listen to, you can really tell the difference. It’s infuriating, though, when you receive a package from Sony with Justin Bieber’s new album. Om Records and Gunner send me physical discs but they know what I’m looking for. When I receive stuff from them, I know it has a good hum. That’s one of the biggest problems we face in the music industry. How to archive everything.”

Is there anything you’d like to add for our readers?
“I have to pee again.”

Here’s a sample of some of our favorite tracks that help us drop in on the biggest lines:

From The Dream Factory


From Light The Wick