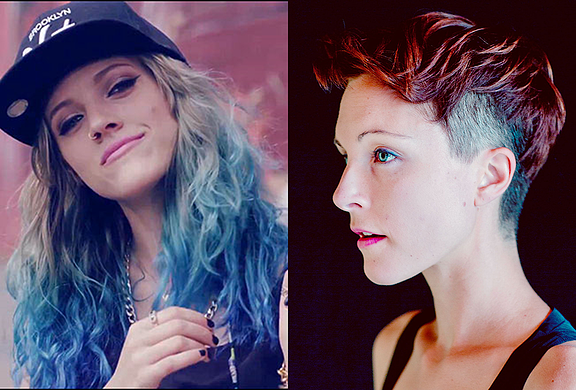 Double Dose of Dames: Tuesday Edition, brought to you by dope ladies who sing good songs. Catey Shaw – the bisexual Brooklynite ukulele subway performer – and POLICA – twin city synthpopper named for the Polish word for “work ethic.” What do they have in common? Well Channy Leanagh (POLICA frontwoman) is a big fan of the radical Canadian feminist Shulamith Firestone, author of the 1970 book Dialectic of Sex: The Case for Feminist Revolution. Once she opened up the book, she couldn’t put it down, even naming her last album after it. And well, Catey Shaw is kinda the embodiment of that feminist freedom. Catey is also from Brooklyn, where there is a Shulamith School for Girls (albeit no direct relation, although a good word coincidence, it’s an Orthodox Jewish school & “shulamith” translate approximately to “peace”). Shulamith Firestone had some pretty out there ideas, for instance she described pregnancy as “barbaric;” and with regards to patriarchal societal structures imposed on women through their biology and the disadvantages caused by pregnancy, childbirth, and child-rearing: “she advocated the use of cybernetics to carry out human reproduction in laboratories as well as the proliferation of contraception, abortion, and state support for child-rearing to enable them to escape their biologically determined positions in society.”  —  The More You Know  —