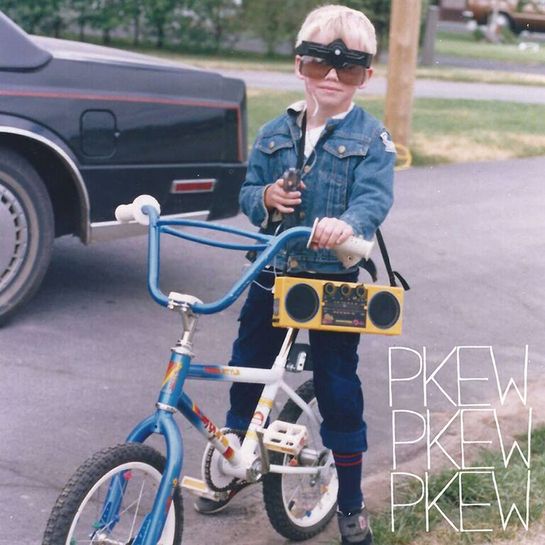 Keepin’ on our Canada kick, Southern Ontario punks Pkew Pkew Pkew (to be pronounced as if you were animating gunshots with your fingers…) are all about having fun and being mellow, like most canucks (except when it comes to their tunes). The Pkew x3 frontman posted a Craigslist ad trying to find bandmates and only one dude replied; a guy who spent most of his time in a TV theme song cover band (TV shows like Pokemon… not Good Times or Friends). As their friendship “blossomed over a love of drinking and anime,” they literally ‘got the band together’ and started started travelling around Canada playing shows in “stupid small towns.” They consider their new album, out this summer, an eleven song anthology that blasts you through themes of failure, nostalgia, growing up, staying young, and getting really, really, really hammered. The Pkews have been compared to other party rockers and fellow canucks, PUP, and Diarrhea Planet (from Ca$hville, Tennessee). Fun facts a-boot Ontario: Toronto the 4th largest city in North America, gets around 300 days of sunshine a year, rivaling Denver. Ontario also boasts the worlds longest street (or at least kinda used to), Yonge Street. It starts at Lake Ontario in the east and runs north and west through central and northern Ontario for 1,178 miles to the Rainy River on the Minnesota border. They claim the world’s longest freshwater beach at 8.6 miles and North America’s shortest railway, at 3.3 miles (they are really struggling for fun facts :-/ ) Also, and way cooler, they had a place called Camp X: a spy school to train the Allies during WWII. The official name was Special Training School 103 (STS103 operated from 1941 to 1946, then continued on in other forms) and pupils included James Bond creator Ian Fleming and Roald Dahl (think James and the Giant Peach, The BFG (that’s the silly looking CGI movie that’s out now), and Charlie & the Chocolate Factory). Ends up Ronald Dahl, before inspiring every kids book and movie ever, was an ace fighter pilot and total badass. After being sent on a flying mission through Africa, later to be told was totally in the wrong direction – they sent him to “No Man’s Land – he crashed his out-of-fuel plane, fractured his skull, smashed his nose, and lost his sight. He dragged his body away from the burning wreckage and passed out in the middle of the rocky desert. Eventually he was saved, didn’t regain his sight for a while, fell in and out of love with a nurse in Alexandria (classic move), returned to dogfighting in WWII (not like Michael Vick), became a dope spy, yaddi yadda. Anywho, Pkew Pkew Pkew have nothing to do with any of those things, except for their name, and I have a new respect for children’s story writers.