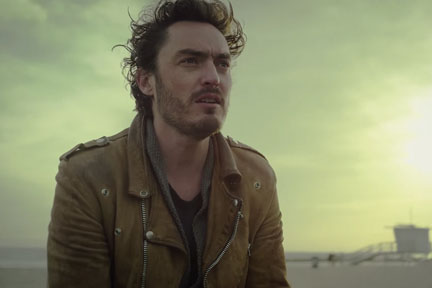 Full disclosure: this post may read like the ramblings of an obsessed super-fan, because that is very much what I am to Civil Twilight. After falling madly in love with frontman Steve McKellar down in Austin, TX, I haven’t been able to blink away the glittering twinkle from my eyes each and every time I hear the soothing coo of his oh so sexy sound.

The Nashville, TN by way of South Africa four-man band’s video for “Holy Dove” hit this week, premiering on the indie-prestigious pages of Nylon. Directed by Daniel Gomes, a long-haired dancer moves fluidly and unassumingly in parallel to the band through the dark, deep and dank tunnels of a subway platform to the LACMA’s Urban Light installation. Of the story’s plot and theme, Civil Twilight notes, “’Holy Dove’ is that of seeing things from a completely unique perspective and seeing something that few others see. You may look crazy, but are you really? In this video, we are playing around with the idea of being possessed by freedom and being unafraid to express it in the world. It is not safe or popular or common, but it is liberating.”

Civil Twilight’s latest album, Story of An Immigrant, hits July 10th, and you know I’ve been doodling Steve’s name all over my notebook in anticipation.

They’ll be LIVE across our river at Bowery Ballroom July 22nd — come join for a night of whiskey drinks and dancing, and witness me falling deeper in love with the group’s intellectual and delicate rock — I’ll be the one in the front row, unable to wipe a stupid smile from my face. Full tour schedule after you press play.