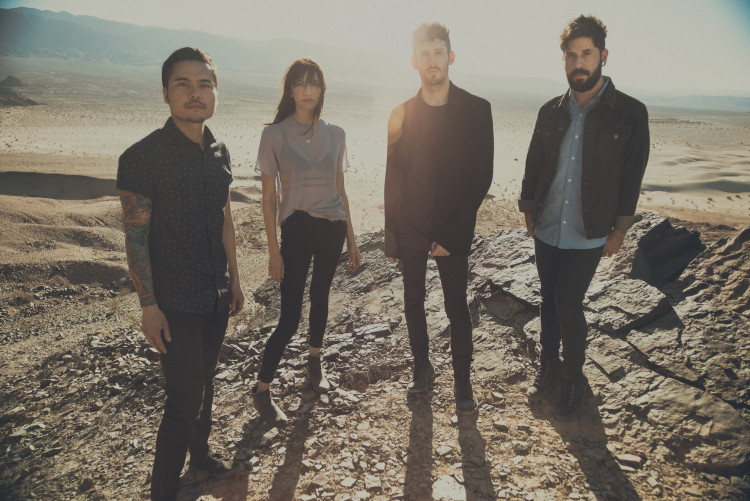 Parade of Lights is a favorite band of TMD. We had the pleasure of having them at SXSW 2014 and were blown away. Since then, we’ve been following their every move in anticipation of their latest album release. Our newest staff writer, Cassie Farley had a chance to chat with Ryan Daly, frontman for POL while they were on the road to Canada. Here’s what they chatted about:

Ryan, How are you my friend?
Hey Cassie, I’m good! I’m good- We are… I don’t know where we are at the moment but we are coming from Silver Spring, Maryland. Played at the Fillmore. And now we are making our way up to Canada.

Oh nice!
Yeah, we play Toronto then Montréal and then make our way back down the east coast.

Anything memorable so far?
Um.. well its been- well do you mean just these few couple shows we’ve done?

Yeah!
Well everyone on the tour has been super awesome. They are really nice people, and have been very welcoming. We have been very lucky. But as far as memorable goes, it’s actually been a little rough haha.

Haha ok. Why’s that?
It’s always tough to get into a groove you know, first couple days of the tour. We are still trying to find it, kind of integrate ourselves into something that is already moving. But we are getting there. Second night was better than the first night, and so forth but we are getting there. So hopefully we will get to Canada and it will be even better.

Yeah, definitely. So congrats on Feeling Electric, it’s amazing! I love ‘Wake Up’, added it to every playlist I have. Can you tell me a little bit more on how making it was? Favorite song?

Ha well it’s kind of a weird story. We were set to tour all summer, we had a bunch of festival shows, etc. But things kind of worked out to where we needed to work on new music. You know we were at the point where we needed to start working on the record, or it was going to be a long time before we did a full record. We decided to cancel a couple of the tours we were on, to do this record. We couldn’t cancel the festival dates though, so the option was to fly from LA to these festivals- which would have cost us a good amount of money. OR we hold up in the Midwest- and drive to the festival dates. Which allowed us to have a studio and a condo for basically the same amount of money. So we decided to hold up in Nashville for about 3 months and did the record. It was interesting- it would have come out much differently if we had known that we were going to be doing it… But out of nowhere we ended up just being like “We are doing a record!”. So nothing was written… nothing what was done. So we literally went in there and built it from the ground up- scratch.

Wow.
You know, produced it ourselves and everything. And yeah- that’s what we came up with. Haha it was definitely an adventure living out there. Some of the best weed I’ve had in my entire life.

Hahaha. Awesome. So favorite track on the album?
Favorite track… hmm. Hard to say. There are obviously things I like about each one. I think one that I listen to and I go “Ok I think we did this one right” is ‘Undefeatable’. I think that that’s one that… you know with producing ourselves, you get caught up with the fine detail and good quality. But I think ‘Undefeatable’ is the one I have the least comments on.

Haha. Ok so what do you want people to take away from your music and performances? I know it’s a pretty broad question.

No, no I get it. I think for me is that everything means positive. Someone asked me this question the other day “What do you want people to take away from the record?” I guess just that it’s just a hopeful record, and something that is inspiring to people. You know as cliché as it sounds, inspiring you to be the best person that you can possibly be. Even though there are some more somber songs on the record- it is reflective of how life has its ups and downs. There is a positive arch throughout the entire record that I see. Hopefully people take that in and connect with it and then apply it to their life in a positive way. And I think for the show, we aim to put out an arena show wherever we are.

Yeah! Yes. I love that. I thought the show you guys did with X Ambassadors was amazing- and you kind of blew them out of the water in a sense. In my opinion at least.

Hahaha well thank you. I remember that show, that was a lot of fun.

It was great. I think also playing in New York is just an incredible energy. That’s what a lot of people say at least when they talk about memorable shows. The hardest city to be in, but can give you the best time.

Yeah. You know that was probably one of our best shows actually.

Really?! Awesome. Glad I was there. Ok so before you were talking about inspiring people through music, but what inspires you as an artist?

Umm… I mean it’s hard to quantified one thing. We are interested in all different kinds of mediums. Anthony is a graphic designer and does a ton of graphic art. All 4 of us are into all different types of art. So it’s one of these things that I think collective… the 4 of us being interested in so many different things, it all goes into the music and makes it what it is. I mean me personally, what inspires me is definitely music. I love 80’s music and I know some people don’t agree but I’m a big U2 fan. Especially The Joshua Tree and Unforgettable Fire. Also, just big epic cinematic things inspire me- entertainment as well. I think that’s why we have such a large sound, and we are not going to edit it because we are in a small venue.

Love it! Ok so ‘Golden’ was the first exposure I had to your all’s music, and then I heard it in an NBC commercial for the Sochi Olympics. What is that like? To hear your music in either a commercial or some other form than your own?

It’s weird because you hear it, but you don’t get to hear the reaction to it. Your kind of like “Oh there it is”. Some people are like “WOW!” haha, but for me, I respond to the people responding to the music if that makes sense. Since you don’t get an immediate reaction to the people that are seeing it. Regardless it’s a weird thing. I mean we are grateful and lucky that our music induced so much in that regard. For some reason people seem to gravitate to our music when it comes to soundtracks and such.

Yeah I agree. You can’t get much out of a song though in :30 seconds, especially when it is supposed to be supporting a product or brand. Ok, so changing lanes any artists that you are feeling these days?

Oh man that’s a good question. Um that we are listening to you mean?

Yeah! Bands that have not really hit it big yet. I love it when I come across an awesome sound that no one has really heard before.

Well recently through a good friend of mine, we found out about this band called ‘Teenage Wrist’. It’s actually the guy from ‘Chain Gang of 1974′ but its a side project. They are totally like 90’s rock… and it’s awesome. We’ve been listening to it this entire tour and it’s amazing.

Ok I’m going to look them up after this. Alright, closing thought. What is next for you all?

Again, hard to say. The goal really is to keep touring on this album and you know spread it a little bit more. Right we have been primarily focusing on the US, and only touring in the US with the exception of Canada. Which is great to be able to get up there, but we would like to spread our wings a bit further than that. Then thinking bigger than that we are already thinking about the next record. The band needs to evolve and be a living thing. We don’t want to be something that is stagnant, we want to make music that peaks people’s interest and keeps the fan base happy. Also as artists we need to grow and change, and I think we are all thinking ahead. Trying to be a little bit ahead of the curve of what is coming next, without being too involved of what is cool right now. Also, I think just giving all that we can as artists.
-CF-