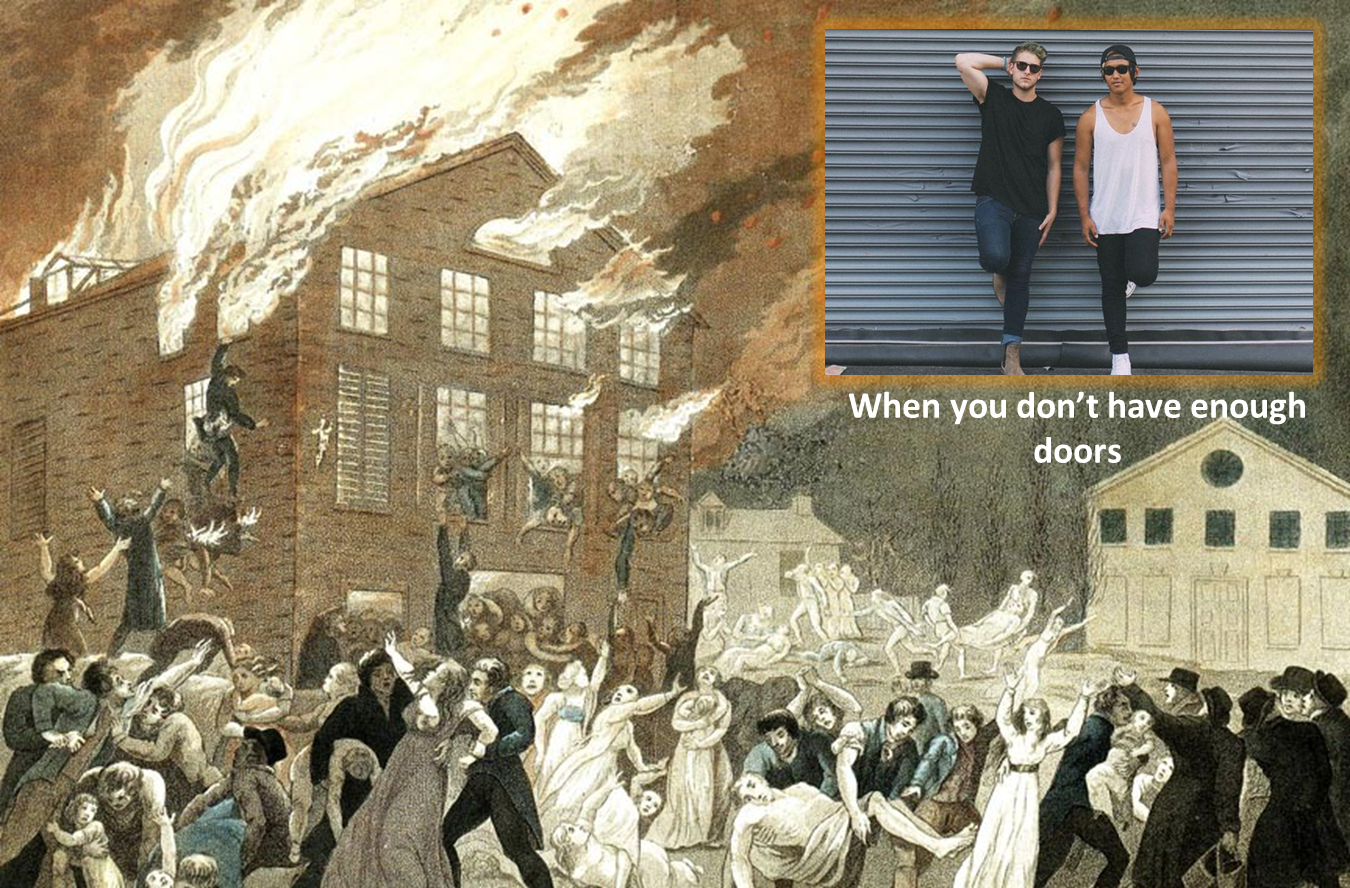 Does 4 Door Theatre have enough Doors?

Generally speaking, the maximum occupancy of a room or building is determined by the number of available exits, since each exit can only accommodate a certain number of people before a bottleneck occurs. And since I am technically the fire marshal of the 19th floor at my office building (woop woop floor 19 yo!) (and that isn’t a joke, I actually am the designated fire marshal in case of an emergency and have subordinates. It’s pretty cool. If there’s ever a microwave fire, for a few hot minutes (yay puns!), I will reign supreme), I thought it’d be neat to see how many fire codes 4 Door Theatre  violate and/or what its max capacity is (and for that matter, Two Door Cinema Club’s). Basically, the International Building Code, or the IBC (that’s what us people in the biz call it – also not to be confused with Snoop Dogg’s LBC – “Long Beach Crew”), set standards for this sort of thing. So let’s assume that all four of 4 Door Theatre’s doors are continuous and unobstructed means of egress, and don’t exit through a kitchen or storage room. And that we’re dealing with doors 32 inches in width so we can jam in as many people in as possible (the minimum clear width requirement of the Americans with Disabilities Act is 32″, but not if the doorway is deeper than 24″, then it’s 36″). Another factor to consider is whether this Theatre has stairs or no stairs (ie – ground level club or in the basement of some building). If there are no stairs, you need 0.2 inches of door width per person, versus 0.3 with stairs. So with four doors, of 32″ width each, on the ground floor (no stairs), this 4 Door Theatre could serve a maximum 640 people (426 if it was in the basement). So like, a good amount, but not enough to get rich from. At least it’s way more people than Two Door Cinema Club – especially since there’s seating involved at the cinema and that brings along a whole heap of other regulations regarding space and what not…

But Feli, why so many rules?! I thought music and art were supposed to be expressions of freedom and raw passion and why you tryna oppress me man!! While I would never wanna be a buzzkill, sometimes art can be dangerous (see: the Brown Note, basically anything by R. Kelly, and Danger Music – a form of noise music meant to harm either the listener or the performer – ya, actually a thing…). In 1991, an art installation in Japan killed a few people when the 500 pound umbrellas fell over during a gust of wind. There’s tons more bonehead art deaths like that. If you find yourself to be patron #641 at the 4 Door Theatre show, and denied access, it’s because of a fire in 1946 Atlanta. Much like the Titanic 34 years earlier, the Winecoff Hotel was deemed “fireproof.” Seriously!? Was that even possible back then? I ain’t no scientist, but unless the hotel was made of water, I’m not sure how it’d be fireproof… Well as you correctly presumed, The Winecoff burned and burned, trapping and killing 119 people because..? THEY DIDN’T HAVE ENOUGH DOORS!

I could go on and on with flamin’ fire facts but I’ll spare you. 4 Door Theatre is ironically a 2 person band from Nashville who make happy pop music.

These are the sorts of things Feli Thinks about